Bang & Olufsen is a Danish company which has been engaged in the production of high-end audio equipment, TV sets, and accessories for 92 years. Bang & Olufsen products have been considered contemporary classics for several decades.

The undying philosophy of the brand is bringing innovative technologies, traditions of the past, and long-standing values together. This approach is clearly seen both in design and production technologies.

Bang & Olufsen was founded in 1925 in a small Danish town of Struer by young engineers Peter Bang and Svend Olufsen. This was the time when engineering was rapidly developing in all countries. In 1939, an iconic radio set called Beolit 39 was born, the first product marked with the “beo” prefix which is present today in the names of some of the company’s other products like Beosound, Beoplay, and Beovision.

One of the main advantages of Bang & Olufsen items is aesthetics. This tendency was chosen even by the founders themselves when they designed their first radios. They wanted to make technology functional, handy, and beautiful. For instance, they drew their inspiration from contemporary interior design trends and tried to produce a radio set that would perfectly blend with every living room. Now one of the most outstanding Bang & Olufsen features is the retro-futuristic design, which resembles shams for science fiction movies.

Touch and feel is one more peculiarity in Bang & Olufsen items. Each piece, from audio systems and TV sets to portable loudspeakers or headphones, is made with great attention to detail and thought about how this piece would be used by the client from the moment he or she opens the package and turns it on.

The hexagon is one of the most common forms in nature, starting from various snowflakes to honeycombs, which also look great as a repetitive and growing structure. Each audio system is unique, and natural beauty is embodied in these endless variations. 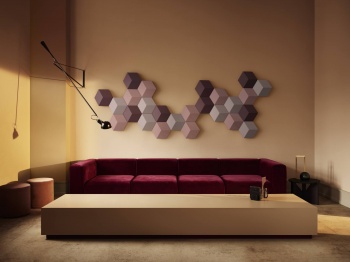 Bang&Olufsen BeoPlay P2 is a wireless and portable speaker for music and calls. The device differs from similar solutions in a very non-standard way of control. For example, double-tapping the anodized aluminum grid, you can stop or start playback, and if you shake the column, the next track will turn on.